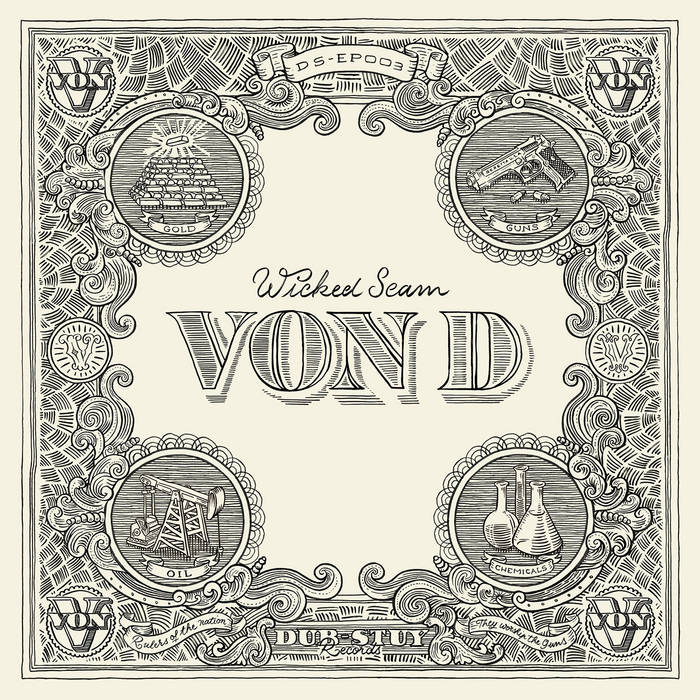 b.kov One of my all time favourites, Von D rocks as always. Tasty percs, fat bass, lyrics with a message. Large up on this! Favorite track: Wicked Scam ft. Jahdan Blakkamoore.

The meeting of Paris-based Von D and Dub-Stuy has been a long time in the making. The French producer first caught the ears of label head Quoc Pham back in 2009, with his dub-oriented productions under the Liquid Wicked alias. Following a recent return to the dub world - after releases for Black Acre, Boka, and Skream’s Disfigured Dubs - some Von D demos made their way to Dub-Stuy and the result is Wicked Scam, a four-track EP of hair-raising and socially-conscious dub music boasting a cast of world-class vocalists and musicians.

The EP centers around its title track, a spacious and heavy riddim with a deadly groove, live guitar, and a stunning lyrical turn from NYC’s Jahdan Blakkamoore, who lent his voice to “Pool Party”, the first-ever Dub-Stuy release. Showing his versatility, Jahdan adapts seamlessly to the riddim’s contortions to deliver a damning statement of the wicked scam politicians and the 1% are running on the rest of us. “Liberation over Liberace!”

Continuing the social theme of the title track, London’s self-styled future dancehall singer Don Cotti lends his rugged voice to ‘Mek A Truce’. The track unfolds somewhere in between song and dub version, with horns and sound effects taking turns between Cotti’s incantations for people to “mek a truce” regardless of race or religion. The last collaboration on the EP sees Von D reach back to the music’s foundation with a vocal from Lone Ranger, a Jamaican deejay who began his career with Coxsone’s Studio One in the 1970s. On ‘Till A Morning’, he shows off his finely-honed chatting by inviting all to come and dance over a jumping riddim featuring live guitar, bass and piano.

Closing the EP is a sample of the legendary Bunny Lee talking about King Tubby and Lee Perry birthing dub before Von D unfurls his own studio experimentation on ‘Surrealiste Skank’, a dedication to the timeless power of dub music.

Wicked Scam further cements Von D’s talent for combining an authentic sound with a modern ear. The bass envelopes the listener without ever choking them, the melodies uplift the soul, and the lyrics feed the mind.

Produced and mixed by Von D at Vonalog Studio. Mastered by Star Delta.